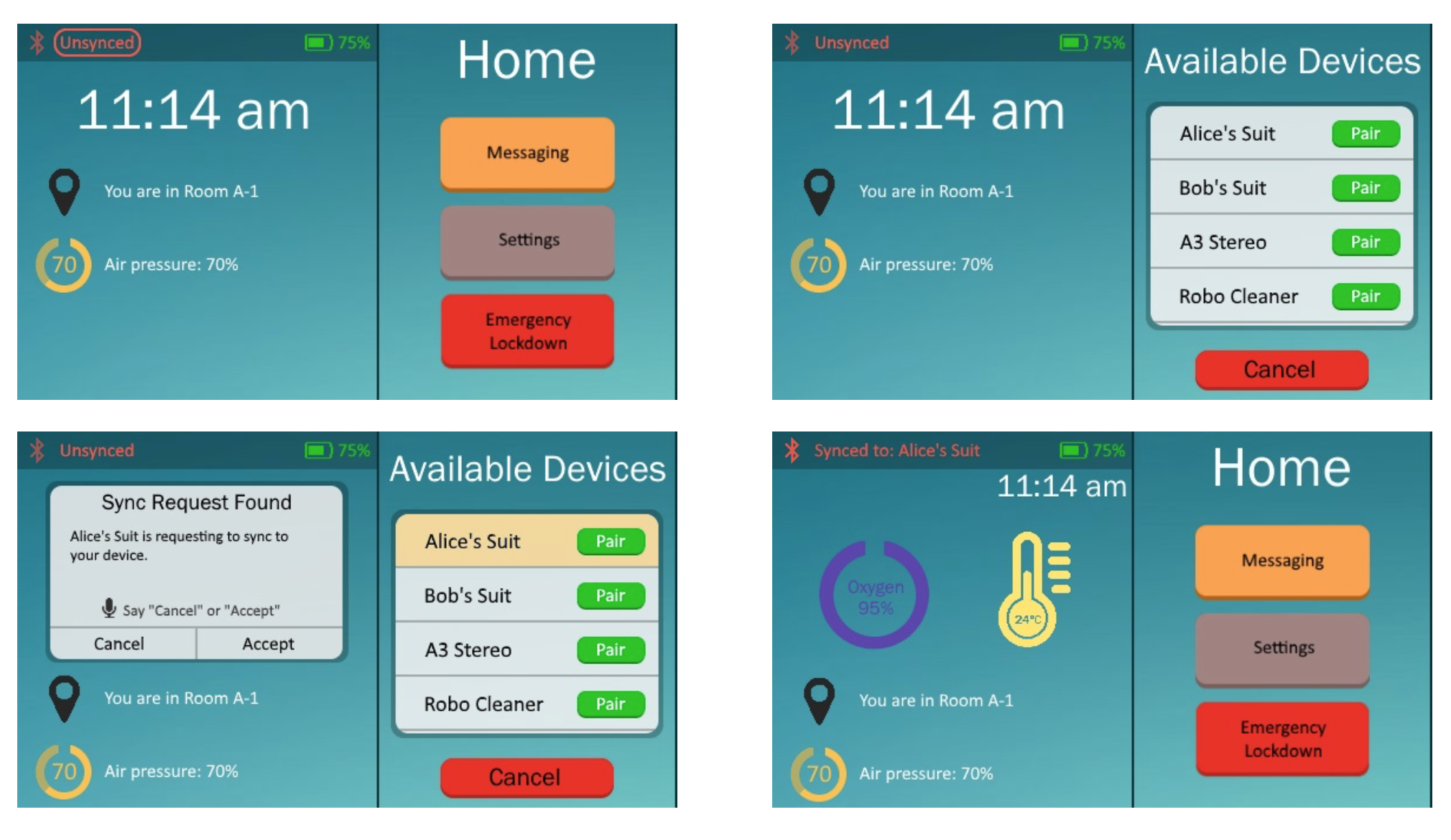 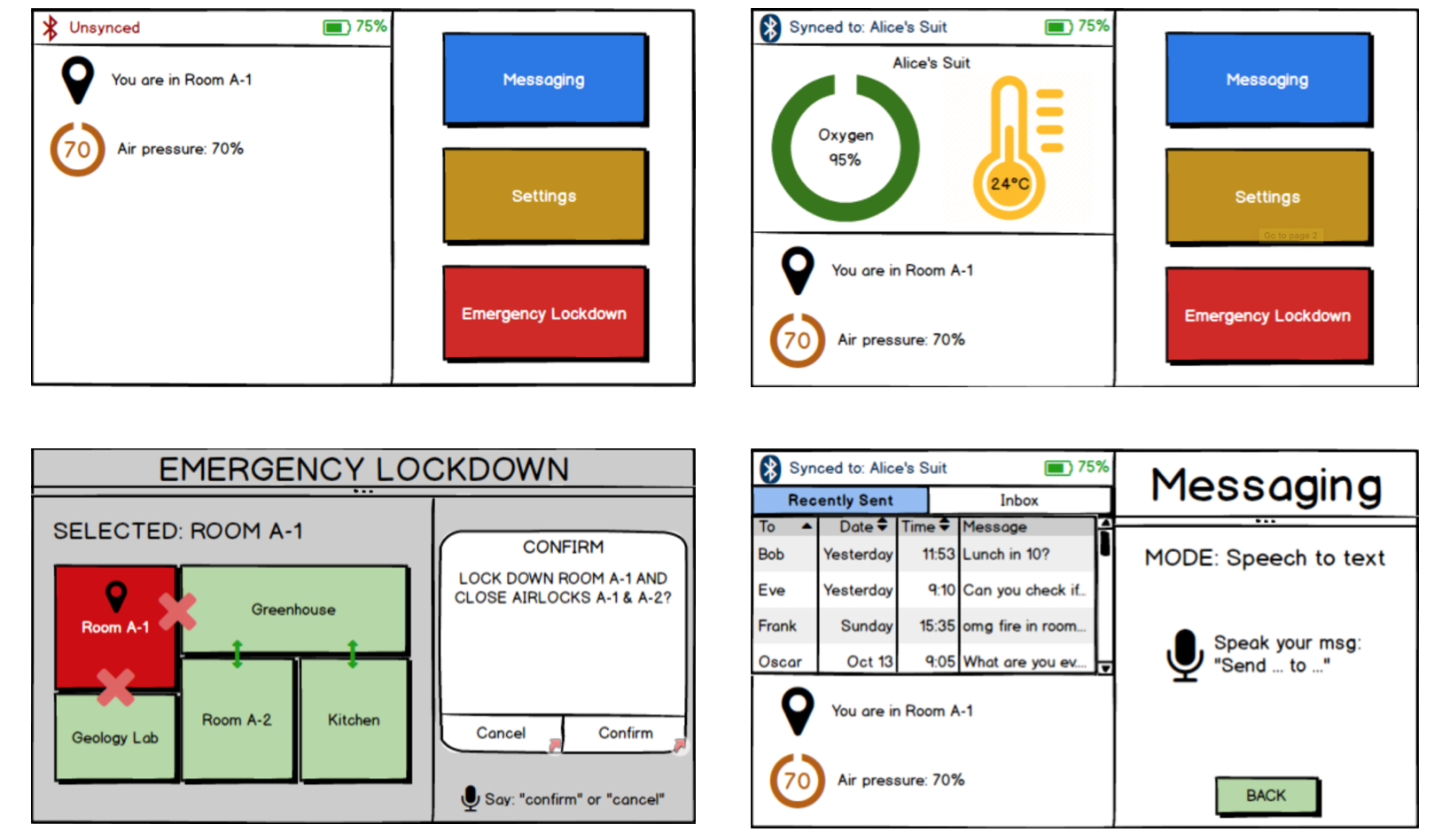 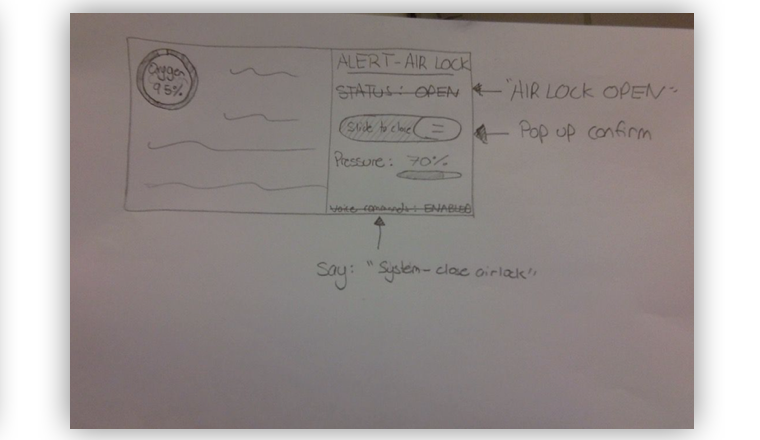 A User-Centred, Iterative Design Process to Design a Smart Bracer for Use in Outer Space

This project was the course project for the Design of Interactive Computational Media (CSC318) course at the University of Toronto. The project was a semester-long iterative human-centred design project, which I completed with 4 other team members (see the report for more details).

We were briefed to design an innovative interface for use in an extreme environment. As a group we chose to design a smart bracer (wearable wrist tablet) prototype for use in outer space, or colony bases on foreign planets, to assist astronauts with life support systems. This gave us an extremely exciting opportunity to think outside the box and design a system that would become essential in future space exploration.

Efforts for space colonisation will likely fail unless there are advanced systems in place to sustain human life. Every resource and piece of infrastructure will require constant and precise monitoring by its inhabitants, and in a fragile environment such as space, there is little room for error. For example, an average Mars colonist will be exposed to an extremely large and complex workload, and may need to respond quickly to emergency situations. This leads into our problem space, which addresses the need to reduce the complexity of a martian’s workload and to reduce the possibility of human error via technological assistance. The variability of this problem is what makes it interesting. There is a need for colonists to have technological assistance; however, what degree/type of assistance would be optimal? Development of such systems is constrained by expenses (time and money), and there are benefits to leaving some tasks up to humans. This is an open-ended optimisation problem, and it also raises the question of what should be prioritised. The following explains the phases of our design process throughout the semester.

First, we researched our problem space (reducing astronaut workload and human error in outer space through assistive technology) in order to explore problems and potential solutions. To do this, we analysed research papers relevant to the problem space and conducted user research through interviews, questionnaires and field studies. The technological and financial feasibility of exploration on Mars has been investigated constantly by researchers as pioneering Mars is at the forefront of human exploration. Alling, A., Nelson, M., Silverstone, S., & Van Thillo, M. investigated the human factor considerations of long-term space habitation in their article Human factor observations of the Biosphere 2. They identified that the colonists must meet stringent physiological and psychological requirements, that they should have substantial knowledge of the construction of life support systems, and noted a need for a more comprehensive real-time modelling and information system, in order to help colonists make better and faster decisions.

To conduct our user research, we questioned participants with a questionnaire and then interviewed those participants, aiming to answer two questions: what aspects of technology are users most comfortable with, and which kinds of tasks would it be useful to automate or simplify using technology? Here is a photo of the consent form we asked all participants to fill out for accordance with ethical guidelines: 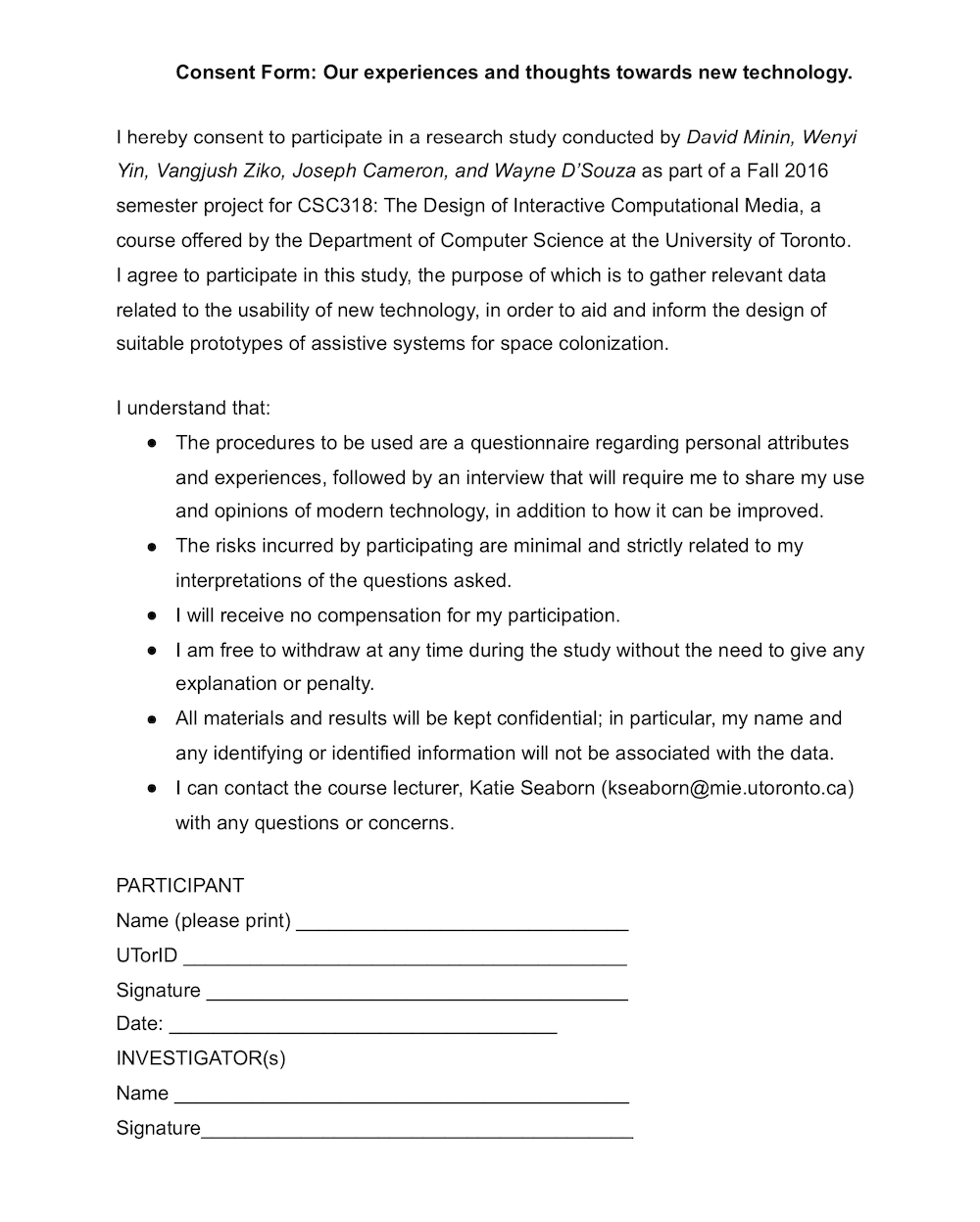 
We realised that understanding the needs and wishes of users here on Earth would be a crucial stepping stone to design a system for outer space. From the questionnaire, we found that an overwhelming majority of participants were familiar and proficient with their computer and/or phones for completing various tasks. Furthermore, we gathered data on automated systems and preferences for automated tasks. A majority of subjects indicated that they would like chores to be automated, for the primary purpose of saving time. However, responses were split for more complex tasks like driving. Subjects trusted automated systems to perform tedious and simple tasks, but not complex and variable tasks. The interviews gave us more insight into how users might respond to specific interfaces. Subjects were more concerned with performance than learning curves and were very receptive to automated home tech for completing menial tasks. On the information presentation side, subjects wanted information to be sorted by priority, and to be visible all in one place. Useful day-to-day information mentioned by subjects fell primarily under real-time environment updates. Here is a photo of the interview script we used when conducting interviews with our participants: 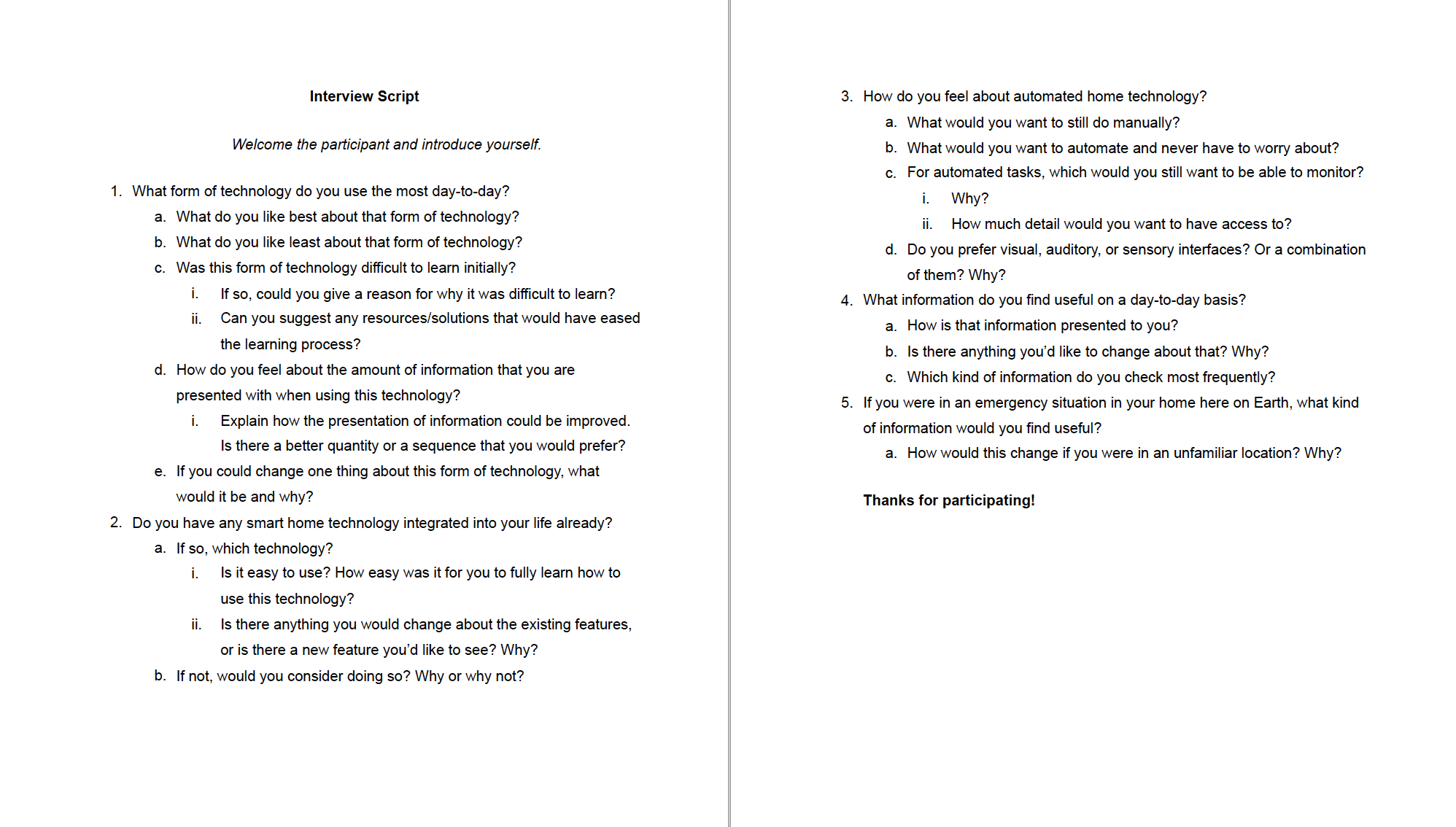 
After combining and discussing results with the team, we decided to focus on designing a device that can help astronauts control basic life support systems, such as activating airlocks and messaging fellow astronauts, because our research had shown that it is menial tasks that people would rather have handled automatically instead of cognitively challenging tasks, especially in the context of an extreme environment like a martian colony base. As a result, we drafted a list of requirements that we deemed necessary to include in our solution and began designing initial low-fidelity prototypes of our system to test with participants.

We also created some user personas at this point, to help guide us through the rest of the design process. Our user personas were astronauts, with technical backgrounds and training who are looking to focus on their roles throughout space missions. From these user personas, it had already become clear that our new system would have to be designed with structure and order in mind, as these astronauts would want as little confusion as possible in potentially dangerous situations when managing life support systems in outer space.

We began by sketching potential solutions to tasks found in our problem space, one of which can be seen below:

Sketch of a user’s response to an emergency alert


We also agreed that the best device for a user in our problem space would be a bracer that can connect to a spacesuit, since it is the most portable system. Eventually, we decided to go with the bracer idea and began our interface design with the solvability of our brainstormed tasks in mind. Our design emulated technology that users would be familiar with, such as a tablet or phone. We then sketched out solutions that this bracer device could provide when dealing with problems in space, as seen below:


We iteratively improved our design using the feedback we obtained from usability research. We noted what worked well with our prototypes, and what did not work well, either through intentional feedback from the test user or through observation. For our usability research, we asked participants to carry out the following tasks with the prototype as an ice-breaker to start interacting:

During early versions of usability research, the following issues were discovered:

Subsequent to these discoveries and observations, the following changes for the high-fidelity interactive prototype were made:

These changes led to this high fidelity interactive prototype: 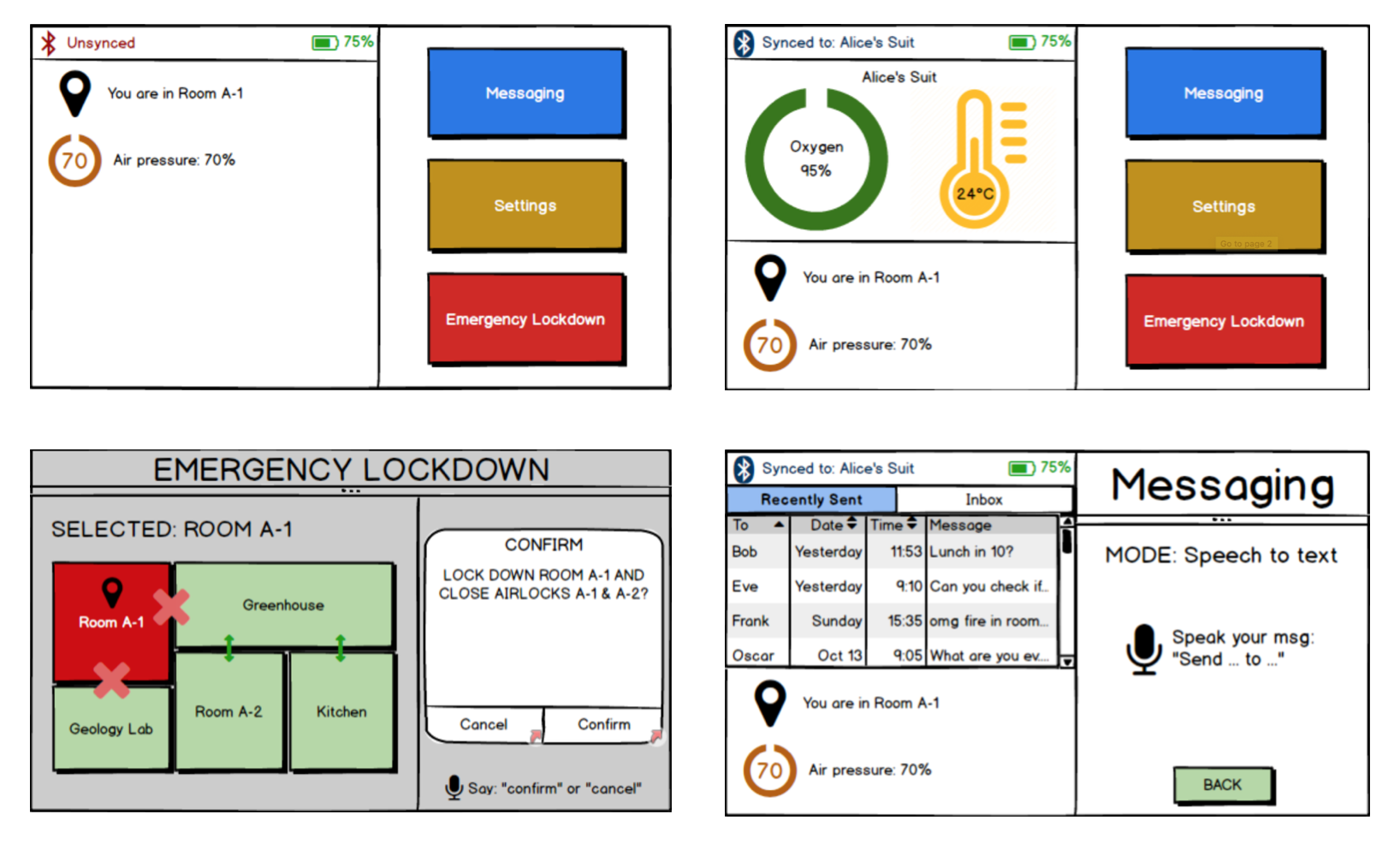 Screenshots of the High-Fidelity Interactive Prototype

After repeating these iterations a few times, we came up with this final prototype: 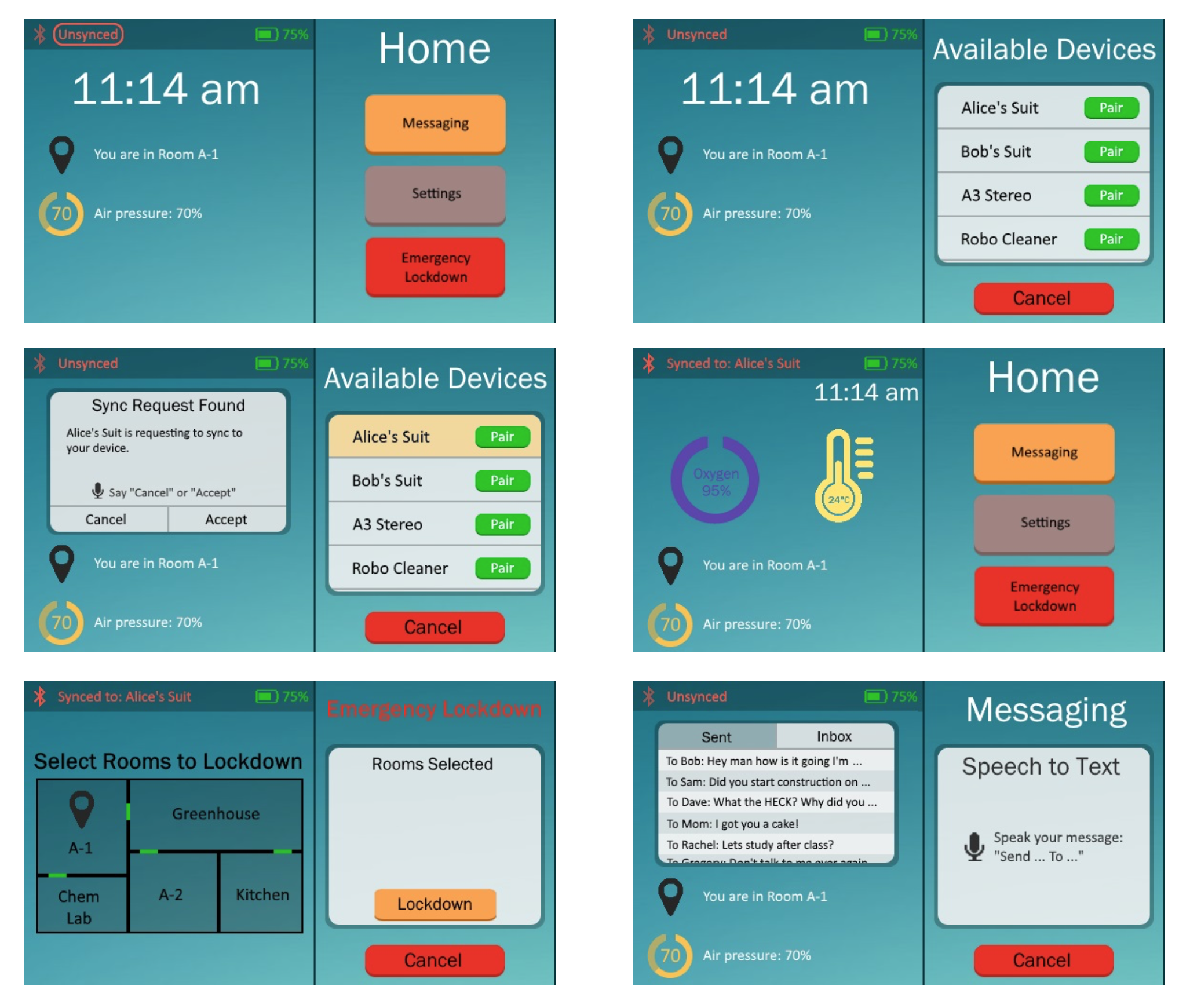 Screenshots of the High-Fidelity Final Prototype


The final prototype was made using MyBalsamiq. However, MyBalsamiq is now closing down and shutting its services, therefore only screenshots remain. Some major changes seen in the high-fidelity prototype were, the addition of menu names at the top of the right-hand screen, more system status information, more confirmation messages and a more aesthetically pleasing colour scheme. Our major design choices were as follows:

It's interesting to note that a major design choice that did not change throughout the whole iterative design process was the screen division concept - on the left-hand side, we provide system information, and the right-hand side is where all our “actions” are. Our participants and test users always seemed to appreciate this design feature, it worked well in every stage of the process.

Here is a table of colours we used in the final prototype:

Here is a table of fonts/typefaces we used in the final prototype:

We learned how to make a user-friendly interface and a product that would benefit users in our given problem space. Through all the data we collected and multiple prototype stages, we refined our design, and we were happy with the outcome. As a next step, we would most likely add more functionality to the prototype and refine the information displayed to the user. Since this is designed as a smart wearable device, there is a lot it could potentially do, and the platform allows for a lot of flexibility. 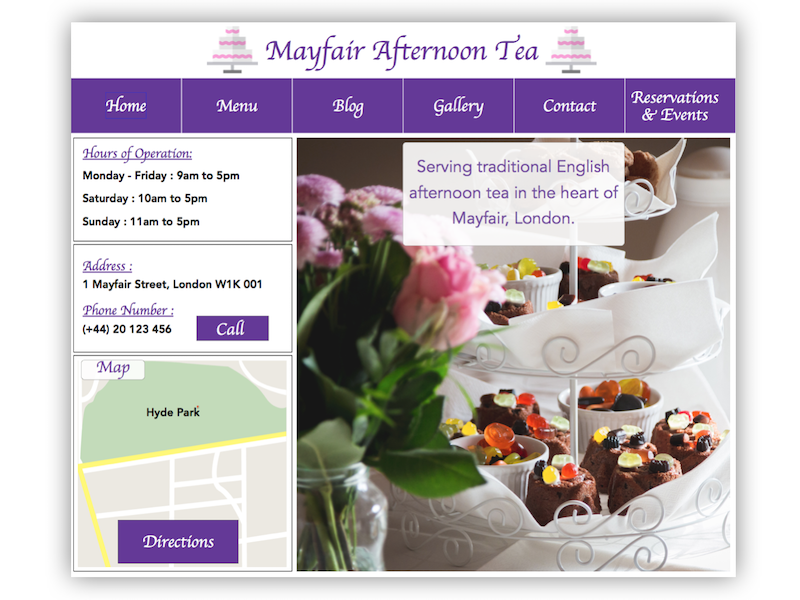 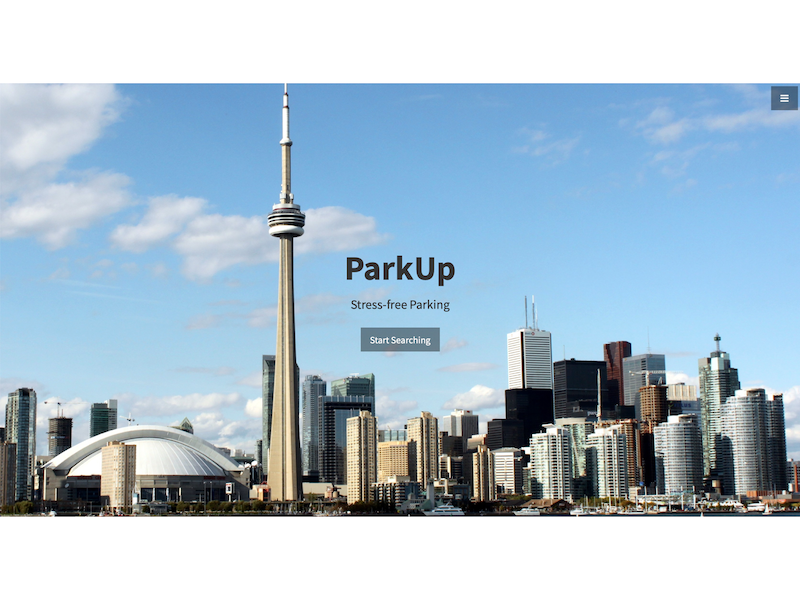 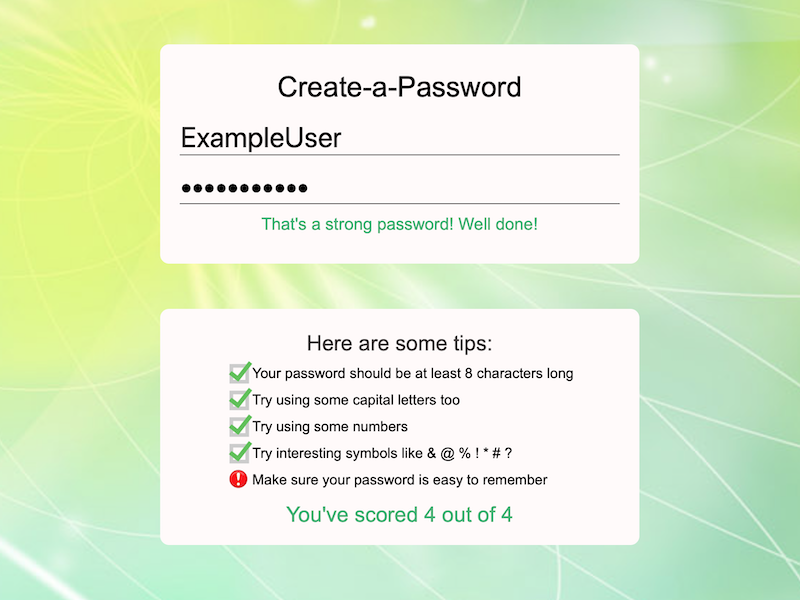